Keysha
was a very shy dog that nobody wanted, until the wonderful folks at House K-9 Wolf Bakery in VT came along!

Diesel
suffered from a case of mange and an owner who didn't want to spend the money curing him. PSHR took him in, brought him back to health and found him a great forever home.

Julia
"We are very happy and amused by Julia," says her new owners!

Keeta, Beau & Skye
are 3 rescues who found a new home together and are now sleddogs.

Eddie
lives with 9 other siberians, all but one of them rescues from various places. Kudo's go out to Eddie's new "mom" for having the patience and loving heart to offer up a home to so many unwanted siberians.

Captain
(on the left) lazing around with his new sister Ellie.

Aurora
found a wonderful new home through PSHR at the age of 8 where she offers canine companionship to her new "sister" Shelby.

Mookie
Mookie was enthusiastically adopted by a family from Connecticut.

Jasmine
is adored by her new family members!

Juneau
is our oldest sibe ever placed, and proves a sibe is never too old to fill your heart with joy.

George & Gracie
(formerly Dakota & Nikki) were adopted at separate times but are the perfect match.

Sasha
came to us underweight and suffering from siezures. Her new home was very understanding and patient with her and she is now in excellent health!

Yukon
was adopted at 8 years old by a couple who had a younger siberian, who say they had no idea what they were missing out on by having more than one!

Tasha
(in center) with new brothers.

Neiko
came into our foster program from a shelter; we think he had been neglected and misunderstood by his previous owner. We placed him with a gentle family where he has really begun to thrive!

Tundra
was adopted out at the age of 11, and just a few months shy of 13 years old earned her CGC title with her new owner. Who says an old dog can't learn new tricks?

Klover
out snow shoeing with his adoptive parents.

Sasha
(on right) singing with her new brother Thor (also a rescue).

Drago
fit right into his new family so well that groomers and vets thought he'd been with them for years!

Sasha (Frankie)
is loving her new home, and family!

Jax
"We're so happy we found him!" says his new owners.

Logan
loves playing with his new family and toys

Lobo
"is an absolute gem," writes his new owners. Here is he lounging on his new throne.

Stoli
has found where she belongs.

Diego
with his new mom Kimberly 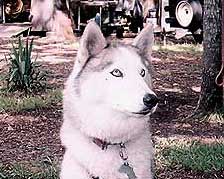 Schobel
a great addition to our family

Steel
is loving his new home.

Wiley
Happy in his new home

Roxy
Fits in with the pack

Yukon
gets a second chance at life

Nikita
(formerly Oriana) came to us weighing only 26 pounds, and needed a lot of care before we found her just the right forever home.

Athena & Tasha
are two siberians we've placed who love to play with their adoptive siberian-sister Brittany.
« Back to Page 1